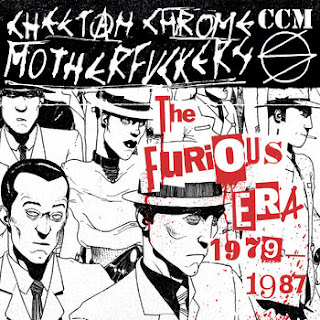 Moterfuckers, and the halo of legend that has always surrounded them.

Moreover, this should be the reaction of those who do not even know who the CCM are.
They could try to fill through this collection a gap almost unbridgeable.
CCM, a band born in Pisa in 1979, which continued its parable until the legendary concert of Casalone in 1987, during which my good friend Stefano Ballini recorded, without knowing it, the only version of the last unreleased track of the band ("Naymiorenggekkio").
A track that marked the end of that concert and also the end of the band's history, as Antonio Cecchi (the only one with Syd to have always been part of the group, first in the role of bassist and then as guitarist) tells us in his book ("No More Pain", we talk about it HERE).
This track, recorded with a simple Walkman (or perhaps a Gelosino?), sees the light for the first time in this collection. The incredible thing is that the sound quality, in spite of its origin (a simple C90, if I am not mistaken not even the original one but a duplicate), is like that of a professional live recording.
This is undoubtedly due to the two Alessandro, Paolucci and Sportelli, who at the time shared a lot with CCM, and who today, in their West Link Studios, managed to give a new, incredible brilliance to the tracks, captured by the original (and often ruined) tapes.
It's a real emotion to listen to such brutal, yet very elaborate songs (for them, Heintz coined the term "Progressive Hardcore"), ranging from the origins of "400 Fascists" to the American Album, “Into The Void", passing through the other seven inches ("Furious Party") and the mythical split tape with I Refuse It! ("Permanent Scare"), as well as other songs. Only the Berlin "live in So. 36"", but you cannot have everything...
It is difficult to recommend one song or another. For me, everyone represents a lot. And it's incredible how, after so many years, every change and take off is still impressed in my memory, as evidenced by how many times I have listened to these records, literally consuming them.
Area Pirata managed the collection, but Jello Biafra himself wanted to publish it on his own Alternative Tentacles label (as he told me at the end of the gig of his Guantanamo School of Medicine in Bologna).
For collectors, I would like to point out that the vinyl edition, a 140 grams double LP in black vinyl, openable with double inner sleeve, contains photos, flyers, texts and an insert ('Discography' plus biography) in Italian and English.
The (double) CD edition includes a 36 pages booklet and an even richer product, with a cardboard cover and the above-mentioned previously unreleased track.